GATESVILLE – The 2018 Veterans Day service will be held at 3 p.m. on Sunday, Nov. 11 at the Gates County Courthouse.

The speaker will be Lieutenant Colonel (Ret.) Keith Grimes. He is a native of Gatesville and a member of the Gates County High School Class of 1979. He is Senior Aerospace Science Instructor, Currituck County High School Air Force JROTC. 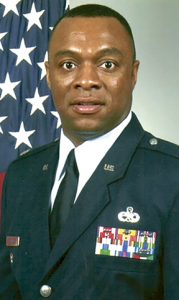 Grimes holds a Bachelors of Science degree from North Carolina Agricultural and Technical State University and a Masters in Aeronautical Science from Embry Riddle University.

Commissioned in 1984 as a graduate of the Reserve Officer’s Training Corp, Lt. Col. Grimes also has served in numerous positions, both foreign and domestic, in support of our nation and its initiatives. He has directed five aircraft maintenance units, served as squadron maintenance supervisor in three units, commanded two maintenance squadrons and one logistics group. He has also served at the Air Staff level, for the “Directorate of Maintenance, Weapons Systems Division” as the Chief, Fighter / Attack Sustainment Branch, Headquarters, United States Air Force. He also served with distinction during the “Gulf War” era in Saudi Arabia and “Operations Enduring Freedom” as the Commander, Logistics Group, 455th Air Expeditionary Wing, Bagram AB, Afghanistan.

Grimes has taught and mentored young men and women for past 30 years. He has extensive experience in aircraft maintenance, logistics, supply chain management and leadership which aligns perfectly with the AFJROTC “leadership and aerospace education curriculum”. He is familiar with the challenges that face our youth today and understands reaching them, “by any means necessary”, is the key.

He is the son of Shirley O. Grimes of Gatesville and the late Clifton M. Grimes. He is married to the former Shellene R. McGee of Dunellon, Florida and they have four kids; Jamal, Kendra, Keisha and Kristofer. He enjoys spending time with his grandkids, hunting the woods of Gates County and fishing the tributaries of the “Mighty” Chowan River. He also enjoys participating and watching all outdoor sports.