WINTON – Vicki Wiggins readily admits that she is a “country girl.”

For someone who has experienced the bright lights of the big city, Wiggins smiles when she tells someone that – stealing a line from a famous movie – there’s really no place like home. 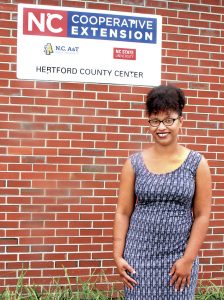 Vicki Wiggins is the new Director of 4-H at the Hertford County Cooperative Extension office in Winton. Staff Photo by Cal Bryant

And with that, Wiggins is back at home with her new job, the Director of Hertford County 4-H.

“There’s something special about this little area that makes me happy to be here,” said the 2010 graduate of Gates County High School where she was a two-sport (basketball and cross country) student-athlete as well as a Beta Club member and vice president of her senior class.

However, there was a time when Wiggins was undecided on her career path.

After graduating from UNC-Chapel Hill in 2014 with a degree in Exercise and Sports Science (and a minor in Public Relations and African-American Studies), Wiggins worked for Carolina College Advising Corp, a non-profit agency that sends recent UNC grads out to high schools in rural areas. She worked full-time with that organization for two years as an advisor at both Southeast Halifax and Northwest Halifax high schools. She also coached basketball at Northwest Halifax.

From there, she returned to school in 2016, obtaining her Masters of Science degree in Kinesiology, the advance study in sports science, from UNC-Greensboro. Her concentration within the Masters study was community youth work development.

“That’s where I fell in love with working with youth,” she said. “While in Greensboro I taught high school physical education and a life skills course. I greatly enjoyed that.”

It was during the second year in Greensboro when she un-expectantly came home to Gates County when her father turned ill and passed away in April of 2017. However, being the ever-present optimist, Wiggins didn’t sit idly by. She maintained her educational studies independently as well as serving as an intern with Gates County Cooperative Extension and its 4-H program.

She returned to Greensboro in January of this year to complete her Masters studies.

“It was when I came back home in May that I found out about the job opening with Hertford County 4-H,” Wiggins recalled. “I applied and here I am.”

What’s so unique about Wiggins landing the job was that she was not involved in 4-H as a child.

“Gates County has an outstanding tradition in 4-H and youth development, one that continues today,” Wiggins said. “I guess you could say I came into 4-H the opposite way, as an adult, but it still worked out because of my studies in college that involved working with young people.”

In a way, Wiggins breaks the mold….after graduating from college and experiencing life in a larger environment, she opted to come home and make her mark in life.

“When I left Gates County High I had in my mind the thought of taking over the world,” she said with a sly smile. “That changed. I took a whole other path. It was the time when I was working as an advisor in Halifax County that I set my sights on a career goal of working with youth. This is my calling.”

Wiggins admitted she did enjoy teaching in a classroom setting, as she did while in Greensboro, much more than she originally thought.

“When graduation was approaching (May, 2018), I had a choice to make,” she recalled. “I did look at several teaching jobs, and then this position with Hertford County 4-H became an option. In the end, I reached a decision to apply for the 4-H job because it was something I could mold and shape my own way.”

Wiggins said her decision was made easier after a discussion with her new boss – Stephanie Parker-Helmkamp, Director of Hertford County Cooperative Extension.

“She said having your own program and watching it grow was something a person can always take pride in,” Wiggins remarked. “I’ve always been the type to use the trial-and-error method….you learn quickly what will work and what will not work.

“Plus, being home…well, close to home….is a plus in this job,” she continued. “I’m living with my mom in Gates; it’s about a 20-minute drive to Winton.”

Her new job began Aug. 6 and she has hit the ground running.

“Stephanie has given me the reigns to run my program and shared the past history of the program here in Hertford County,” Wiggins said. “I spoke to the former 4-H Director here and learned of what worked and what didn’t work. I’ve spoken with Kelli Boone (the Gates County 4-H Director) and received some great ideas. I reached out to the current members of Hertford County 4-H and asked what they would like to see in the way of new, different programs.

“All in all, it’s been a great experience and I’m thankful for all the help I’ve received thus far,” Wiggins added. “Stephanie is great to work with, as are Becky (Castello; the administrative assistant in the Winton office), Josh (Holland; Ag Agent) and Anassou (Banna; Small Farms Management).”

“I want to increase those numbers; obviously there are more than 74 students in the county,” Wiggins stressed. “I’m starting with them and building this program through recruitment.”

That recruiting effort will include Wiggins visiting all the schools in Hertford County.

“I have to get my face out there; letting the kids, the principals, the teachers see me and understand I have the same best interests in my heart as they do and that’s developing the life skills of our young people,” she noted. “It’s all about developing a level of trust.”

In the past, Hertford County 4-H featured a Media Club, a Teen Council, and involved in Easter Seals.

Wiggins is seeking youngsters between the ages of 5-to-19 to become involved in 4-H. Ages 5-8 are in the “Cloverbuds” program.

“Once you become enrolled there are so many programs offered,” Wiggins said. “One is the annual Chicken and Rabbit show later this month. This year we are partnering with Gates County 4-H with that particular program.”

Her other immediate goals include getting local youth involved in leadership programs.

“I’m open to ideas; I welcome feedback,” Wiggins stated. “My main goal is to prepare young people for what they will face in life.

“As a product of northeastern North Carolina, sometimes it’s hard for a young person to imagine life outside our little area,” Wiggins stressed. “Getting our kids some exposure to other things allows them to make life decisions of their own, whether that’s going off to college or finding a job. 4-H is the gap filler for our school system because it can teach life skills.”

To learn more about Hertford County 4-H, contact Wiggins at 252-358-7822, by email at vmwiggin@ncsu.edu and/or via Facebook (Hertford County Cooperative Extension).