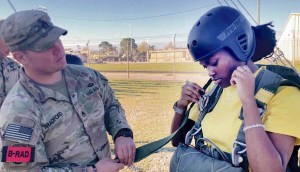 The JROTC program prepares high school students for leadership roles while making them aware of their rights, responsibilities, and privileges as American citizens. The cadets were taken around Fort Bragg and introduced to possible career fields in the Army.

“I wanted to give the cadets what Fort Bragg is all about,” said Chief John Howard, Naval Science Instructor at the high school. “Seeing different aspects of the Navy, Coast Guard and Marines are great; but they really haven’t had the chance to see what the oldest branch in the military has to offer.”

Gates County High School is a small public, rural high school. People in the county are primarily farmers, but with increases in population migration, the county has become a bedroom community for families stationed at Hampton Roads, Virginia. There are approximately 12,244 residents in the county, which is surrounded by Virginia and the Chowan River.

“Currently, we have 36 cadets, and our total school population is right around 486,” said Chief Howard. “I am the only naval science instructor.”

The cadets experienced an indoor weapons simulator, jumped from a 34-foot tower, and operated a flight simulator during their tour of Fort Bragg.

“I believe the kids had a blast,” said Howard. “The flight simulator was a success because a few of my cadets want to become flight aviators.”

“The biggest highlight of the day was being with all the cadets,” said Erin Matthews, Cadet Executive Officer at Gates County High School. “We are all so busy after school and it’s very rare for all of us to hang together.”

Matthews said she wants to become a fighter pilot when she graduates and enjoyed the opportunity of operating the flight simulator. The 34-foot tower gave her a shock when she realized just how high the tower is.

“I was confident and ready to go, but then when I got up there, I was scared,” said Matthews. “It took too long to fall once I jumped out of the tower.”

“My cadets will have a lot to think about on the ride back home,” said Chief Howard. “Each branch is unique, but we all work together in winning our nation’s wars.”