RODUCO – It’s easy to understand why Anthony Ballard admires Volodymyr Zelenskyy…he and the President of Ukraine share a lot in common. 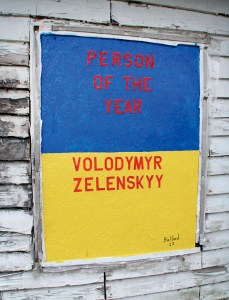 Anthony Ballard hand-painted this tribute to Ukraine President Volodymyr Zelenskyy on the side of a building he owns in Roduco where he plans to open a convenience store. Staff Photo by Cal Bryant

No, Ballard isn’t rallying the troops to protect his native Gates County against enemy attacks. Rather, he and Zelenskyy are similar in their love for where their feet are firmly planted and their wish for brighter days ahead.

Ballard so strongly believed that Time Magazine would select Zelenskyy as its “Person of the Year” that he painted the side of a building he owns in Roduco with that proclamation. The funny thing is that the painting, complete with the colors of Ukraine’s national flag, preceded Time’s announcement by two weeks.

This marks the 95th consecutive year that Time has bestowed the honor. The magazine article praised Zelenskyy for his boldness in the face of Russia’s invasion of his country.

“I thought that President Zelenskyy was a very worthy choice for the honor,” said Ballard who admits he is an avid follower of local, state, national and global news. “I wanted to show my respect to him and what he has done for his people.

“I admire him for standing up against the world’s biggest bully, Vladimir Putin,” Ballard added. “President Zelenskyy shows much courage and his determination. He’s not going down without a fight. He has been on the front line of the defense. He’s not going to shy away from doing exactly what he asks someone else to do. I admire that in a leader.”

The high school dropout readily admits that turning his back on education at that time was a big mistake.

“I thought I knew it all and didn’t need school…boy was I wrong,” Ballard said, adding that he did obtain a GED certificate in 1977 and went on to study at what was then Roanoke-Chowan Technical Institute.

From there he left for the bright lights of Atlantic City, NJ where he worked several jobs, to include a waiter at the Golden Nugget Casino. While there in 1980, Ballard had a brush with fame.

He left Atlantic City in 1982 and headed back to his native Gates County. Like many in that rural county, Ballard found employment just across the state line, landing a job with Kinney Shoes in Suffolk, VA.

“I started as a part time shoe salesman, but when I broke several of the store’s sales records they promoted me to assistant manager,” Ballard boasted.

Ballard started his own business at home in 1987, selling arts and crafts and doing lawn work. That lasted until 1999 at which time he started farming as well as working at a service station and a funeral home. He switched careers in 2014 when he climbed behind the wheel of a dump truck.

But even now in retirement at age 65, Ballard still has the “itch” to keep himself busy. When the U.S. Postal Service announced a plan to close its tiny location in Roduco, Ballard took a stand and led an effort to keep it open.

“We were able to save our little post office; it may be small but it’s always been a part of our community and I didn’t want to see the doors closed,” he stressed.

When the building across from his home went up for sale a couple of years ago, Ballard made a down payment and the property is now his.

“I finished paying for it last year and now plan to open it with my friend Isadora Blount. We’re going to open a convenience store there to serve our community,” Ballard said.

“I’ve got the same determination as President Zelenskyy. I’m going to bring back some life to Roduco with my store,” he concluded.