GATESVILLE – Tim Wilson’s future as Gates County Manager depends on the outcome of a pending vote of the board of commissioners. 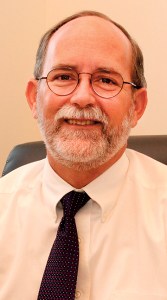 A medical emergency at the Oct. 19 meeting of the board occurred just a few minutes after Commissioner Jonathan Craddock motioned to fire Wilson for insubordination. That motion was seconded by Commissioner Ray Freeman, who appeared to lose consciousness moments later, which prompted an unexpected end to the meeting.

Freeman was taken to the hospital and is now at home recovering.

According to Dr. Althea Riddick, chair of county commissioners, Craddock’s motion will be voted upon at the next regularly scheduled meeting on Nov. 16.

The motion to terminate Wilson’s employment came during a presentation from Jason Sample, the county’s Emergency Management Director, who was on the meeting agenda to provide an update on the 911 Dispatch Center.

Upgrades to the Dispatch Center have been ongoing since this past winter when it suffered equipment malfunctions and staff shortages. Working through an agreement with Perquimans County, Gates County was able to dispatch its 911 calls from the town of Hertford for approximately two months while new equipment was ordered and installed.

Sample told the board that the county’s entire allocation of state E-911 funding was spent during the 2021-22 fiscal year. The majority of those funds were used to purchase a new CAD (Computer Aided Dispatch) server for the main center and two recorders (one for the main center, the other for the back-up center in Perquimans County).

He added that new radio consoles have been ordered, but not yet delivered due to supply chain issues.

Other needed equipment for the Dispatch Center includes

He added that ordering equipment is a time consuming process because all purchases must be pre-approved by the state.

Freeman asked for the dates for when Sample ordered the work tables and chairs for the Dispatch Center. He answered by saying he didn’t have the exact dates, at which time Riddick interjected that the information Freeman was seeking could be obtained through the county’s Finance Office.

“If you’ve ordered them, then get the date of that order and who they were ordered from and put [that info] in a packet to give to the [county] attorney and give us a copy of that updated report,” Riddick told Sample.

“Plus I’d also like to have the date and the time when you were requested by the Chair [Riddick] to replace the chairs that was told that we allegedly stole,” Freeman added.

“I received a call that two commissioners had taken chairs from the meeting space of the governing board and had taken them to the Dispatch Center,” Riddick said. “That was not authorized. Any furniture purchased for a specific space is under the authority of the county manager. There were two chairs missing. That was done as a stunt to cause chaos. I immediately called Mr. Sample and told him to bring those two chairs back to where they belonged and for him to go purchase two chairs and he would be reimbursed.”

Craddock then asked what type of consoles were purchased, to which Sample said they were part of a contract the county approved with Motorola.

“But we haven’t purchased the tables,” Craddock inquired.

“No, because of the funding there at the time, the recorder and the CAD server were more important than a desk,” Sample responded. “That’s the first thing on the requisition for the next purchase.”

“Is that something we can take out of fund balance,” Craddock inquired.

Sample said pre-approval would be required from the state and he was unsure if the cost would be 100 percent covered, adding that funds are only allocated for certain items.

“We’ve been talking about this – ordering tables and chairs – for almost a year now,” Craddock noted. “We’ve been kicking this can down the road….waiting on the [state] E-911 Board, waiting on supply chain issues. Can’t we do something to fix it?”

“If we spend our money, they [state E-911 Board) may not reimburse us,” said Commissioner Linda Hofler.

“It’s unfortunate that this is taking so long, but now we know what state dollars and what local dollars we have,” said Wilson.

Craddock then asked how long did it take for the new furniture ordered for the commissioners’ meeting space to come in.

“I didn’t have any supply chain issues and none of that [furniture] is specialized equipment,” Wilson answered. “It took approximately a little over a week from purchase to delivery.”

“So, if we had of ordered it [furniture for the Dispatch Center] last January or February when we first started talking about it, it would have been here by now probably,” Craddock noted.

“I’m tired of talking about it,” Craddock continued. “Madam Chair, I’d like to make a motion to terminate Tim Wilson, County Manager, for insubordination and the lack of performing his duties.”

Freeman immediately offered a second to the motion and Craddock called for a vote.

“We’ve talked about this in I don’t know how many meetings,” Craddock replied. “On this particular item, me and Commissioner [Jack] Owens have sat down and spoke with him [Wilson], asking him to address the issue. We’ve talked about this in probably four or five meetings. I documented it on his [Wilson’s] evaluation. The list goes on. He has disregarded anything I say. This [response] can go on as much as you want.”

“If it goes on, I’d like you to go on with the facts sir,” Wilson responded.

“I called for a vote,” Craddock said….to which Riddick interjected, “stop, stop, stop,” while banging the gavel.

It was at that point where Freeman suffered a medical emergency while seated in his chair. Individuals rushed to his aid and Gates County EMS responded to the scene.

Wilson, who has been employed as county manager since March of last year, did not respond to a request made by this newspaper seeking comments on Craddock’s claim of insubordination.