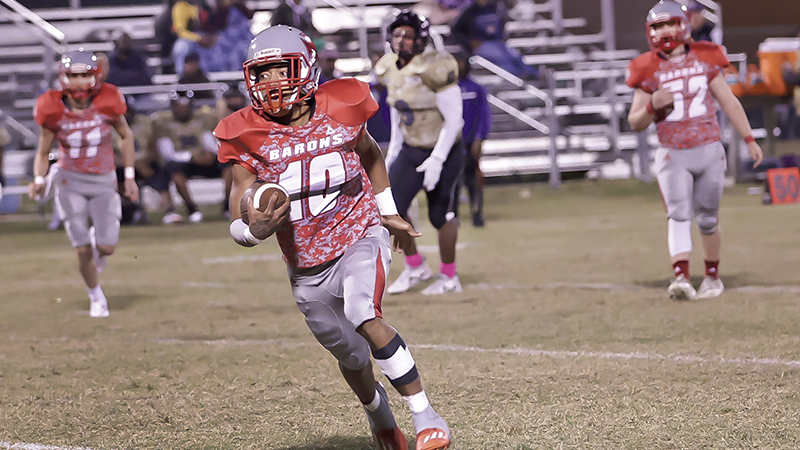 Semaj Cross turns the corner en route to part of his 185 rushing yards vs. South Creek on Friday night. Cross and his fellow GCHS upper classmen celebrated Senior Night with a 28-14 win to close out the regular season. Photo by Charles Revelle

GATESVILLE – October began on a high note and ended on one as well…and in between was just as good.

The victory, the fourth straight this month for the Red Barons, allowed Gates County (6-4 overall and 4-2 in league play) to finish in third place in the Four Rivers Conference, trailing defending state champion Tarboro and runner-up Riverside.

Gates is seeded 12th in the Eastern Class 1-A bracket and will open the 2022 NCHSAA state playoffs at home this Friday (Nov. 4) by hosting league foe Washington County (3-7 overall) at 7 p.m. The Red Barons defeated the Panthers, 34-8, in Plymouth on Oct. 14.

Against South Creek, the Red Barons raced out to a 20-0 lead early in the third quarter before holding off their guests.

Set up by A.J. Hart’s fumble recovery that he returned 18 yards to his own 46 yardline, Gates County marched 54 yards in 11 plays capped by an 8-yard TD run by Cross. The conversion run failed, leaving the ‘Barons with a 6-0 lead at the 5:32 mark of the opening period.

GCHS scored on their next possession, this one coming on a “short field” after a high snap on fourth down sailed over the South Creek quarterback’s head and he had to scramble to fall on the ball at his own 27 yardline. The Red Baromns scored six plays later on a 1-yard run by Cross. A.J. Riddick ran in the conversion, increasing the Gates lead to 14-0 with 39 seconds left in the first quarter.

Gates County had two other good chances to add to that lead before halftime, but came up short both times.

Following an interception by DeAndrey Smith that he returned to near midfield, the Red Barons drove to the South Creek 16 yardline where a fourth down run failed to move the chains.

The visitors then drove to just past midfield where a drive ended on fourth down.

Taking over at their own 43 yardline with just 25 seconds left before intermission, Cross reeled off runs of 14, 27 and 10 yards that moved the ball to South Creek’s six yardline. A face mask infraction on South Creek got the Barons to the three yardline from where Cross was stopped at the one yardline on the final snap of the half.

The Red Barons would not be denied a touchdown on the opening possession of the second half where Cross capped a short drive (following a failed onsides kick by the visitors) with his 22-yard scamper to paydirt. The conversion failed, but GCHS had stretched its lead to 20-0 at the 10:03 mark of the third quarter.

South Creek answered with back-to-back scores. The first came on a 10-play drive capped by Angel Sosa’s 2-yard TD run. Sosa added the conversion run as Cougars pulled to within 20-8 with 3:37 left in the third quarter.

Kel’javious Moore then recovered the ensuring onsides kick, giving South Creek the ball at Gates County’s 47 yardline. From there, the Panthers used 12 plays to find the endzone as Tayvon Lee scored from four yards out. The conversion run failed, but the Cougars had rallied to within 20-14 with 8:33 left in the game.

But Gates County answered, using heavy doses of runs by Cross on their next drive. He ended it with his 1-yard TD run and then added the conversion run that sealed the deal for the Red Barons with 4:31 left in the game.

Gates County finished with 255 total yards, all on the ground. In addition to Cross’s effort, Riddick added 48 rushing yards on nine carries while Smith chipped in 22 yards on six attempts.

South Creek also stuck with a run-oriented offense, finishing with 252 total yards. Sosa led that effort with 91 yards on 17 carries. Derion Tillery added 81 yards on 16 carries while Lee chipped in 76 yards on 16 attempts.