GATESVILLE – A Sunbury native who now holds the rank of Brigadier General in the U.S. Army will serve as the guest speaker at the annual Veterans Day service held in Gates County. 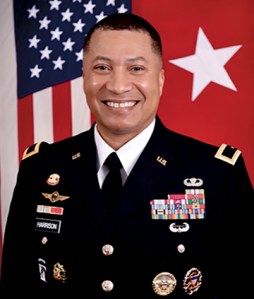 The event will be held at 11 a.m. on Nov. 11 in the old courthouse in Gatesville. This year’s speaker is Brigadier General Richard A. Harrison, a 1990 graduate of Gates County High School.

The Gates County High School Navy ROTC Cadets will present the colors at the ceremony, which is free and open to the public.

Brigadier General Harrison assumed duties as the Deputy Chief of Staff, G-3/5/7 United States Army Training and Doctrine Command (TRADOC) on June 15 of thus year. TRADOC recruits, trains, educates, develops and builds the Army; establishes standards, drives improvement, and leads change to ensure the Army can deter, fight, and win on any battlefield now and into the future.

Following Battery Command, Harrison was selected as a Staff Intern and served in the Immediate Office of the Secretary of Defense and a Strategic Planner/Executive Officer for the Army Initiatives Group in the Office of the Deputy Chief of Staff. He deployed in support of Operation Iraqi Freedom, serving in numerous positions at the headquarters for Military Transition Teams in Iraq.

Upon graduation from Georgetown University, Harrison was stationed at Fort Bragg and served as the Executive Officer for 3-4 Air Defense Artillery Regiment (ADAR). After graduating from CGSC, he returned to Fort Bragg and served as the Deputy Commanding Officer for the 108th ADA Brigade and later the Battalion Commander for 3-4 ADAR. He deployed with elements of his battalion in support of Operation Enduring Freedom (OEF).

Following graduation from the U.S. Army War College, BG Harrison deployed to Doha, Qatar, where he served as the Assistant Chief of Staff G-3 (Forward) for the 32d Army Air Missile Defense Command (AAMDC) in support of OEF.

BG Harrison commanded the 69th ADA Brigade at Fort Hood. While serving in brigade command, he deployed with elements of his brigade to the CENTCOM AOR in support of OEF. In June 2017, he relinquished command and was immediately assigned to the Joint Staff, Pentagon. During his tenure on the Joint Staff, BG Harrison served as the Division Chief for the Protection Division and later as the Executive Assistant to the Joint Staff J-3. He later as served the Executive Officer to the Commanding General of UNC/CFC/USFK.

He holds a Bachelor’s Degree in Business Administration from ECSU, a Master of Arts in Policy Management from Georgetown University, and a Master of Science in Strategic Military Studies from the United States Army War College.