MURFREESBORO – Chowan’s University Ministerial Board of Associates met Sept. 19 in conjunction with the Taylor Religious Heritage Lectures. After participating in the lecture featuring Baptists on Mission (BOM) Executive Director-Treasurer Richard Brunson the members transitioned to the Chowan Room for an opportunity for fellowship and further discussion with Brunson. 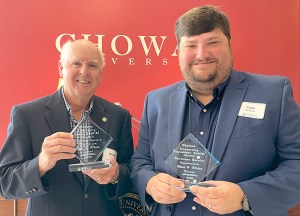 At the beginning of the meeting, special recognition was given to two Gates County ministers. They each received the Blue & White Award for their churches’ financial support of the Chowan Christian Service Association (CCSA). Pastor Dr. Wayne Proctor accepted the award on behalf of Eure Baptist Church, as they have faithfully given to the CCSA Eure Baptist Scholarship since 2008. Their scholarship helps students called to the ministry. Rev. Cody Brinkley received the award on behalf of Reynoldson Baptist Church. In 2016, the church established the CCSA Rev. Billy Price and Claire Titmus Presley Missions Endowment to support students going on mission trips.

Minister to University, Rev. Mari Wiles, gave an update on Chowan’s Campus Ministry and then introduced Baptists on Missions guests Richard Brunson and K Brown, Director of Photography. Wiles shared her gratitude for the friendship she has had with Brunson and Brown over the years. Wiles then served as host to the informal question and answer time while Brunson candidly answered questions from the ministers. He shared how BOM is included in disaster relief planning with the state and other government agencies. Brunson also discussed ministering cross-culturally, working with other denominations, and the joy of serving others in Jesus’ name.

Before concluding, Brunson offered the Board a glimpse into the opportunities he receives daily to serve others. During lunch, he received a text message invitation to help Hungarian Baptists create mobile feeding units for Ukrainian refugees. Brunson shared that the money he had received that day from the CCSA and Campus Ministry fundraiser could be used to help in this feeding ministry.

Director of Church & Community Relations Lou Ann Gilliam concluded the meeting with words of appreciation for Richard Brunson and K Brown. She also thanked the ministers for being Chowan cheerleaders in their communities.