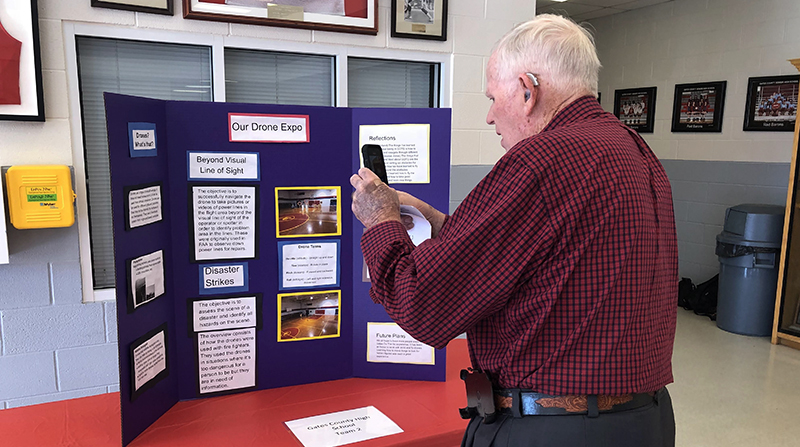 Ray Felton, one of the expo’s collaborators and chairman of the Gates County Board of Education, takes a photo of a Gates County High School team’s presentation board at the “Sea to Air” drone expo held in April of this year. Contributed Photo

For the Gates County Index

GATESVILLE – Following a successful launch in April of 2022, Gates County Public Schools’ “Sea to Air” drone expo will return to K-12 schools in February of 2023 in a continued effort to promote student interaction with science, technology, engineering and math (STEM) education. 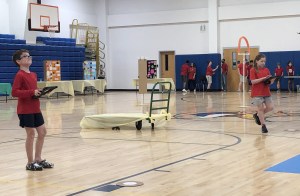 The “Sea to Air” drone expo was developed in 2021 by the comprehensive science and technology program, “Gates on the Go!”, a partnership between East Carolina University (ECU), Gates County Public Schools, and the Ray and Judy Felton Family Foundation.

The program’s mission is to serve Gates County students and teachers through professional development, educational resources, the utilization of technology and overall support in STEM education.

After months of practice, participating students then showcase their technical skills in STEM by flying the Tello Drones through various obstacles in teams. Students are also required to create a presentation board to showcase the information and skills they learned throughout their experience with the drones. At the end of the expo, students are awarded medals for their work.

Amanda Hobbs, Gates County District Academically or Intellectually Gifted (AIG) Coordinator, said applications for the 2023 expo were sent out to parents and students the week of Sept. 19 to all five county public schools. She said “Gates on the Go!” has also made various recruitment efforts at the middle and high schools to garner interest from students.

Each school will be represented by two to three teams, Hobbs said, composed of an estimated 10 to 12 students. Teams and acceptance letters will be finalized on Sept. 30, she said, and all teams will begin meeting the first week of October.

Currently, Hobbs said the “Sea to Air” drone expo is set to occur on Feb. 2 at Central Middle School. All community members are invited to attend the expo, she said, including teachers, staff, parents, fellow peers and Gates County Public School board members.

“We are going to have our elementary kids show their flight skills first, then we’ll have a complete expo of the ‘show-me’ boards for everybody, and then after that we’ll have middle and high school flight skills,” Hobbs said. “And then a presentation of awards at the end.”

Those who participated in the drone expo in April of 2022 became more interested in STEM learning and activities, Hobbs said, generating more student interest in local schools. She said students also learned to problem solve, collaborate with their peers and how to make individual contributions to a team effort.

Hobbs said the “Sea to Air” drone expo also exposes participants to a number of career paths and skills that students might not experience in rural areas of eastern North Carolina.

“There’s also the technology component, they explore various career connections throughout the program,” Hobbs said. “So they’re learning about all sorts of careers that are focused around drones, which living in such a rural area, it’s so important to provide that kind of information to our kids.”

Ann McClung, science coordinator for ECU’s Center for Stem Education and one of the coordinators for “Gates on the Go!” planning, said students and parents can expect a few changes to the 2023 “Sea to Air” drone expo.

This year’s event will require each team to design a field element or obstacle for the drones to fly through, McClung said, while middle and high school teams will be invited to participate in an additional drone runway competition.

Students gain a number of skills when participating in the drone expo, McClung said, including through public speaking, peer communication, interaction with technology, and research. She said the impact “Gates on the Go!” has had on Gates County students has furthered ECU’s university mission of regional transformation and service.

“Part of the mission of the Center for STEM (Education) is to provide resources and information, STEM education and content, to the general public or to the school systems,” McClung said. “To me, it’s a win-win situation because it shows the collaboration and the connection with the community in order to grow a stronger relationship.”

Those interested in learning more information about “Gates on the Go!” and the “Sea to Air” drone expo should contact Amanda Hobbs.