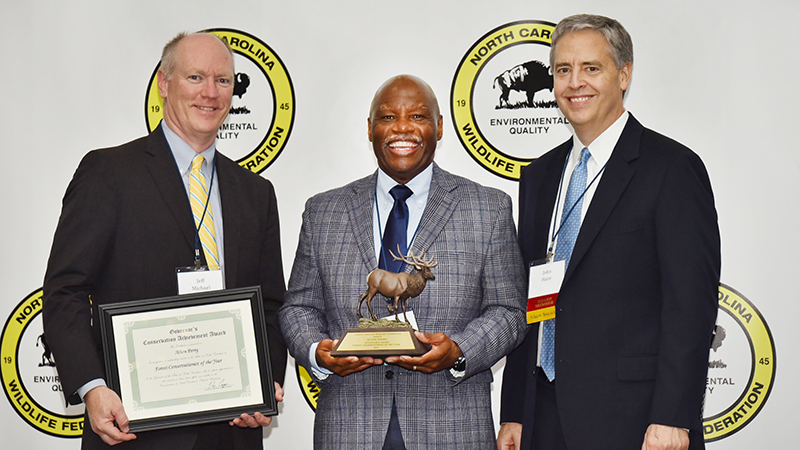 CARY – Alton Perry, director of Roanoke Electric Cooperative’s sustainable forestry and land retention program, has been recognized as the Forest Conservationist of the Year.

The honor is from the North Carolina Wildlife Federation. Deputy Secretary Jeff Michael of the N.C. Department of Natural and Cultural Resources and John Hairr, N.C. Wildlife Federation board chairman, celebrated Perry’s dedication to the state’s wildlife, habitat and natural resources as part of the 58th annual Governor’s Conservation Achievement Awards banquet held Sept. 10 in Cary.

Perry, who resides in Aulander, was among the 19 agency professionals, elected officials, volunteers and organizations honored at the banquet, which included a thank you video message from Gov. Roy Cooper.

Remarks from banquet emcee and award chair T. Edward Nickens, emcee at the banquet, noted that Perry “wasn’t quite ready for the golden years” upon his 2012 retirement from the N.C. Forest Service after a 40-year career.

That same year, Perry started work as director of sustainable forestry and land retention for the Roanoke Electric Cooperative. He now helps African-American families and landowners in a seven-county service area manage their woodlands to enhance quality of life and build family legacies.

In some of the nominating materials for Perry, a colleague wrote of his love for his upbringing on a North Carolina farm.

“It seems he has carried that enthusiasm with him throughout his career,” the nominator wrote, “and leveraged it for the common good—protecting natural resources and aiding families with being good stewards of their natural resources just like his family was..”

Perry represents and advocates for North Carolina families with natural resources locally and across the state through board leadership at Conservation Trust for North Carolina and as part of the North Carolina Heirs Property Coalition, and nationally in the Forest Climate Working Group, and even internationally through his role in the U.S. Council of a Trillion Trees.

“Alton Perry has never forgotten how a piece of farmland molded and shaped who he is and what kind of legacy he wants to leave,” stated Nickens.

“This is truly an honor, and I’m very humbled by it,” said Perry. “When I first got the email saying I would receive this award, I thought it must be a phishing email. We take cyber security seriously, and they tell us, ‘if you get an email you’re not expecting or don’t recognize, it’s probably phishing.’ But [NCWF] confirmed it was real.

“Thanks to my wife, daughter, cousin and everyone who has been with me on this journey as I’ve moved through this process and space,” Perry continued. “And thanks to all my folks at Roanoke Electric and my partners who I’ve learned from. It’s so rewarding to work with folks – who, in many cases, have been denied access – and bring them into the conservation space. We all must ensure North Carolina stays green and productive, so we don’t leave anyone behind.”

First presented in 1958, the Governor’s Conservation Achievement Awards are the highest natural resource honors given in the state. The annual program brings together diverse conservationists to highlight wildlife conservation achievements and inspire others to take a more active role in protecting North Carolina’s natural resources for future generations.

“It’s always one of our favorite events of the year – a chance to celebrate the beauty of nature and the shared commitment of those working every day to protect, conserve and restore North Carolina’s wildlife, habitat and natural resources,” said Tim Gestwicki, N.C. Wildlife Federation CEO. 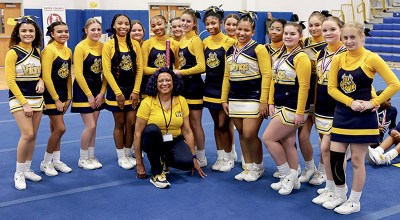 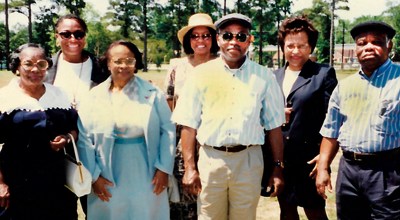